On Monday, 13 September 2021, Tandean Rustandy, owner and founder of PT Arwana Citramulia Tbk, was awarded the “LutherRose 2020 for Social Responsibility and EntrepreneurCourage” at the Grand Hotel Majestic in Bologna. Rustandy was awarded with the LutherRose in 2020. The ceremony, which had been planned several times to take place in the Augustinian Monastery in Erfurt, unfortunately had to be postponed due to Corona.

With Tandean Rustandy, the International Martin Luther Foundation (IMLS), based in Eisenach, Germany, honoured “a personality who has used the Reformation tradition of freedom and responsibility for the common good in an exemplary way with his life and professional work”.

With his company PT Arwana Citramulia Tbk, the largest manufacturer of ceramic tiles in Indonesia, Rustandy is committed to environmental protection and social justice in his home country. In a predominantly Muslim country, Rustandy professes Christianity and is a member of the Reformed Evangelical Church in Jakarta. His business philosophy is based on the theological principles of Martin Luther and John Calvin. 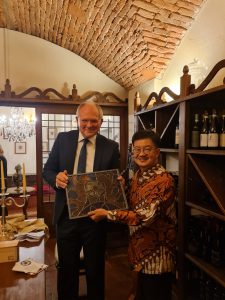 Prof. Dr. Herman J. Selderhuis, Rector of the Theological University of Apeldoorn and board member of the International Martin Luther Foundation, paid tribute to the laureate in his laudation: “Tandean Rustandy symbolizes in a unique way Martin Luther’s stand on the economic and social responsibility of a Christian living from God’s grace. The fact that an Indonesian businessman receives the Luther rose demonstrates the global and lasting significance of Luther’s theology.”

Tandean Rustandy expressed his gratitude for the award by saying, “God the creator come to serve, then our purpose of life is to serve and sacrifice.”

The award ceremony in Bologna was also attended by a delegation from Indonesia in honor of Rustandy.

View all partners Become a partner